The proper functioning of neuronal circuits requires a balanced interplay of excitatory principal neurons and inhibitory interneurons. The major neurotransmitters used by inhibitory interneurons are the amino acids glycine and GABA. The ionotropic postsynaptic receptors for these amino acids are recruited to the postsynaptic membrane of inhibitory synapses during development, and their numbers and dynamic regulation determine the strength of inhibitory synapses. The postsynaptic accumulation of glycine receptors and major subtypes of GABAA receptors depends on the scaffolding protein gephyrin. During synapse formation, gephyrin assembles into a hexagonal lattice beneath the postsynaptic plasma membrane, which traps the receptors under inhibitory presynaptic terminals by interacting with the cytoplasmic domains of selected receptor subunits.

The formation and stabilization of postsynaptic gephyrin scaffolds requires interactions with numerous other proteins, including regulatory components of the actin cytoskeleton, microtubule-associated motor proteins and effectors of G-protein signaling. The work of this group concentrates on the role of the brain-specific guanine-nucleotide exchange factor collybistin (Cb). By gene deletion in the mouse, Cb has been shown to be essential for the accumulation and maintenance of both gephyrin and GABAA receptors at a subset of GABAergic synapses in specific regions of the forebrain, such as the hippocampus and the amygdala. Cb triggers gephyrin scaffold formation at postsynaptic sites by interacting with the cytoplasmic domain of the synaptic adhesion protein neuroligin 2, which is clustered at sites of nerve terminal-postsynaptic neuron contact by its interaction with presynaptically enriched neurexins. Our goal is the identification of the molecular mechanisms by which Cb specifies gephyrin apposition at inhibitory postsynapses, and thus regulates postsynaptic GABAA receptor numbers and thereby synaptic efficacy. 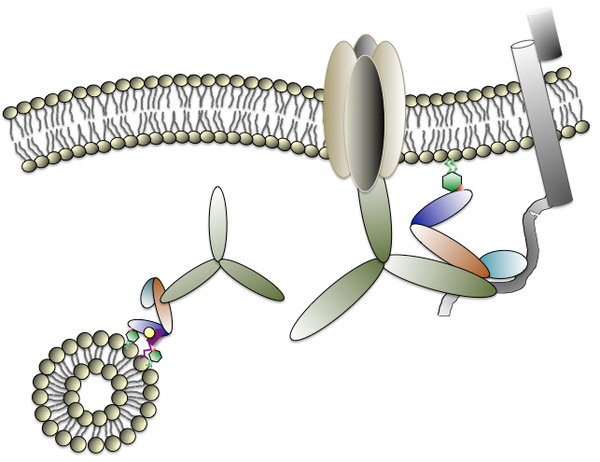